In a career that spanned forty years Gustav Kirchhoff made many contributions to the scientific world that including validating laws in thermochemistry, spectroscopy and electrical circuitry.

His circuit laws which he started when still a student, are still in use today and they became his doctoral dissertation. In collaboration with Robert Bunsen at the University of Heidelberg, they made many new discoveries including caesium and rubidium and they created a prototype spectroscope that opened up a new field of science known as spectroscopy as they established the theory of spectrum analysis.

Using a prism they successfully split light into its component wavelengths and they furthered this research by discovering that every element gives off its own unique wavelength that can be used to positively identify its presence.

His published work included the acclaimed four volumes on Lectures on mathematical physics called "Vorlesungen über mathematische Physik" which was first published in 1876 by B. G. Teubner Verlag in Leipzig. From some of the finest scientific minds come some of the finest lines to remember, so here is my compilation of 10 of the best Gustav Kirchhoff quotes

The scientist Robert Wilhelm Bunsen wrote in a letter dated 1859: "At present I carry out research with Kirchhoff which does not allow us to sleep. Kirchhoff has made a completely unexpected discovery. He has found the reason for the dark lines in the spectrum of the sun and he is able to reproduce those lines... in the continuous spectrum of a flame at identical positions with the Fraunhofer lines. This has opened up the path to the determination of the chemical composition of the sun and of the fixed stars"

The physicist Robert Von Helmholtz described him thus: "The life of Kirchhoff was that of a thinker, too. He did not travel all over the world to see nature in the splendid attire of her multifarious productions, like Humboldt or Darwin; he did not work his way to theory through a school of purely practical life, like Faraday or Siemens. No more did he pass his life in the whirlpool of historical or social events. He accomplished his work quietly in the externally serene, but internally the more active, abodes of science,—in the lecture-rooms and laboratories of several German universities" 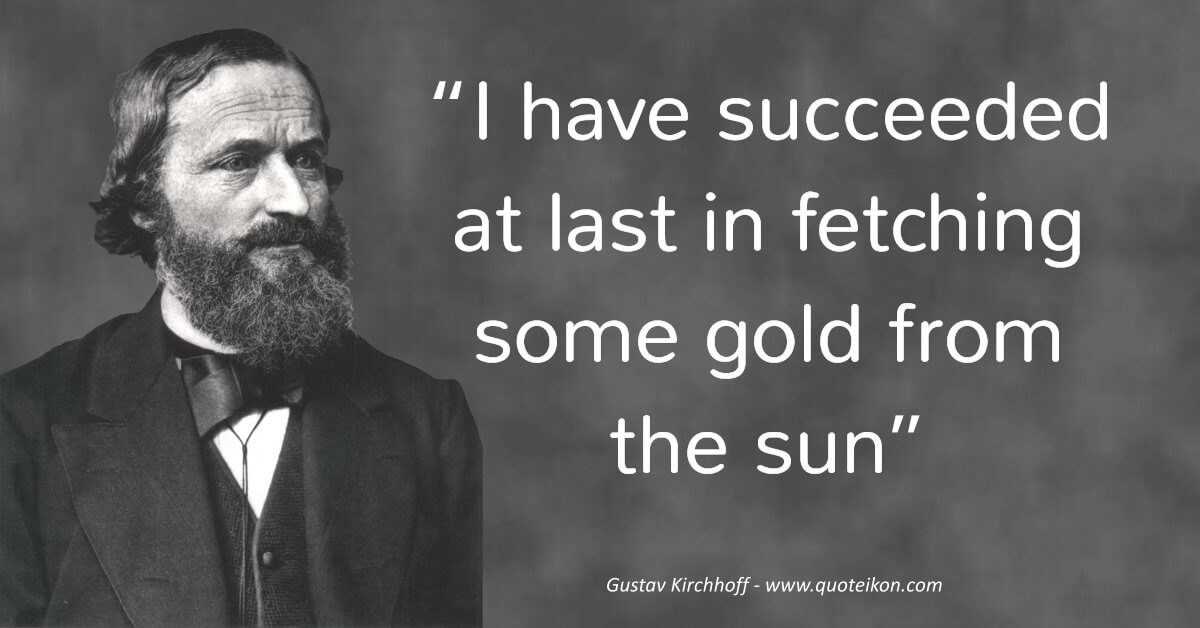