George Formby was an unlikely looking star with his goofy smile and Blackpool beach wit but his was a genuine talent without the baggage laden pretensions carried onto stage by the ego's of his acting peers. His adulation lay in the warmth he accentuated and the truth that he spoke and together with his saucy songs, although mild by todays standards they were considered outrageous in some quarters and were even banned from the airwaves of the BBC.

Unlike most 'Northern' talent Formby was even appreciated south of Watford junction and he came with royal approval as Queen Elizabeth II admitted she knew all his songs and was a big fan. After starting his career in the recording industry he moved into film and was a box office hit in England during the 1930's and 1940's.

George Formby's association to Beryl Ingham was strategic to his success, she became his wife and his manager and it was through her guidance that enabled his talent to really flourish. He was an oddity who came across with a naivety that was a bridge between the reality of his real persona and his act on stage. His was a charm so pervasive that it melded minds in a camaraderie so infectious that he became both a favourite of the troops in WW2 and their commanding officers as he worked tirelessly doing everything he could to support morale during the battle to liberate Europe.

His WW2 workload and his influence did not go unnoticed as in 1946 he received the Officer of the Order of the British Empire (OBE) in 1946 in recognition of his selfless work during the war.

His wife Beryl was also instrumental in introducing his trademark ukulele to his act and in a recognition to his contribution towards the instrument he was inducted into the Ukulele hall of fame in 2004 with the accompanying citation: "He won such love and respect for his charismatic stage presence, technical skill and playful lyrics that he remains popular forty years after his death".

His down to earth character, both on and off stage, is still remembered with the warmth he epitomised during his career which was also notable for his quick witted one liners, so with this in mind here is my compilation of 12 of the best George Formby quotes

The head of ENSA Basil Dean spoke of his WW2 performances: "Standing with his back to a tree or a wall of sandbags, with men squatting on the ground in front of him, he sang song after song, screwing up his face into comical expressions of fright whenever shells exploded in the near distance, and making little cracks when the firing drowned the point lines in his songs"

The secretary to Queen Elizabeth II received a letter that influenced the following conversation: "I don’t honestly think, if you don’t mind me saying so, this is appropriate. You’re head of the armed forces, head of the Church of England, I don’t think you can be president of the George Formby Appreciation Society." To which the Queen responded: "Well, I do see that but I love George Formby." "Really?" replied the secretary. "Oh yes, I know all his songs and I can sing them" was the queens response of approval - to his repertoire if not the presidency of Formby's appreciation society.

The actor John Walley described him thus: "George had a warmth that is peculiar to those who don’t have great pretensions and to those who, through sheer hard work and talent, reach the top"

The actor Terry-Thomas was miffed to say that being the main act following him was frustrating: "Formby put the audience in a certain mood which made them non-receptive to whoever followed ... Even though my act was the star spot, I felt on this occasion that my being there was an anti-climax"

The author David Bret made a claim about his marriage: "There’s no doubt he was adulterous and she was as well. They knew what one another was doing. It was always a marriage of convenience" 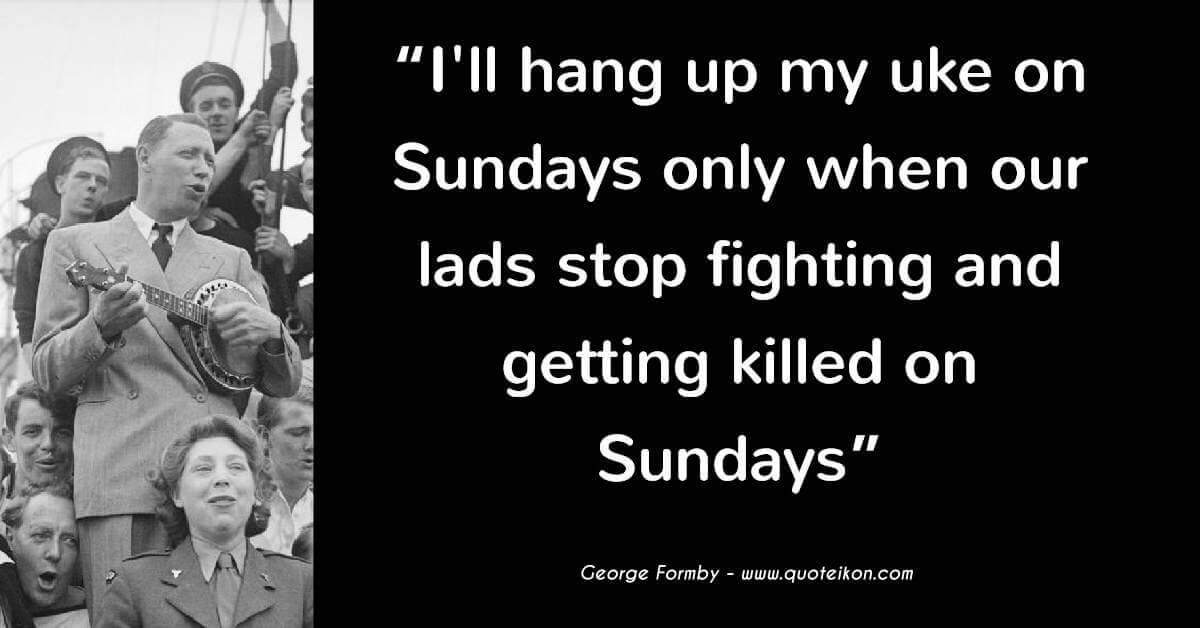