Frank Lloyd Wright was one of the leading architectural lights of the early twentieth century with his back to nature approach and organic design evident in his award winning house design called Fallingwater and everyones favourite museum the Guggenheim in New York.

He was born Frank Lincoln Wright in Wisconsin in 1867 but changed his middle name to Lloyd when he came of age. In 1887 he started work as a draughtsman during a building boom in Chicago and was quickly cutting his teeth on many building projects. Work was easy to come by and he quickly became a designer and changed jobs numerous times in order to gain a higher salary.

In the late 1890's he set up his own company and soon received his first independent commission the Winslow House and this led to him eventually becoming a pioneer of the Prairie house style. By the turn of the twentieth century Wright had 50 plus projects to his name and public developments were being added to this list.

It also saw the breakdown of his marriage to Catherine in 1903 after he started an affair with Mamah Borthwick Cheney who was the wife of a client. This relationship was to end in tragedy as Mrs Cheney along with six others (including her two children) were brutally murdered with an axe at Wrights Taliesin estate by an estate worker called Julian Carlton.

Wright decided to throw himself into his work to put the horrors of what happened behind him thus beginning a long line of successful architectural designs including the Imperial Hotel in Japan survived the 1923 Great Kantō earthquake.

His designs constructed buildings as a wordsmith constructs poems and his structures continue to be an inspiration to aspiring architects to this day, so here is my compilation of 15 of the best Frank Lloyd Wright quotes.

The architect Philip Johnson was impressed to call him: "He's the greatest architect of the nineteenth century"

The author Michael Benedikt spoke of the deeper meanings behind design: "Wright’s use of the word “nature” did not mean only 'what we find outdoors'. It was something deeper. Wright knew that when people speak of the “nature of things” they mean their very essence, the 'that which makes them what they are', which is always and only one step away from 'that who makes them what they are'."

"The musician Paul Simon was moved to lyrical appreciation: "So long, Frank Lloyd Wright. I can't believe your song is gone so soon" 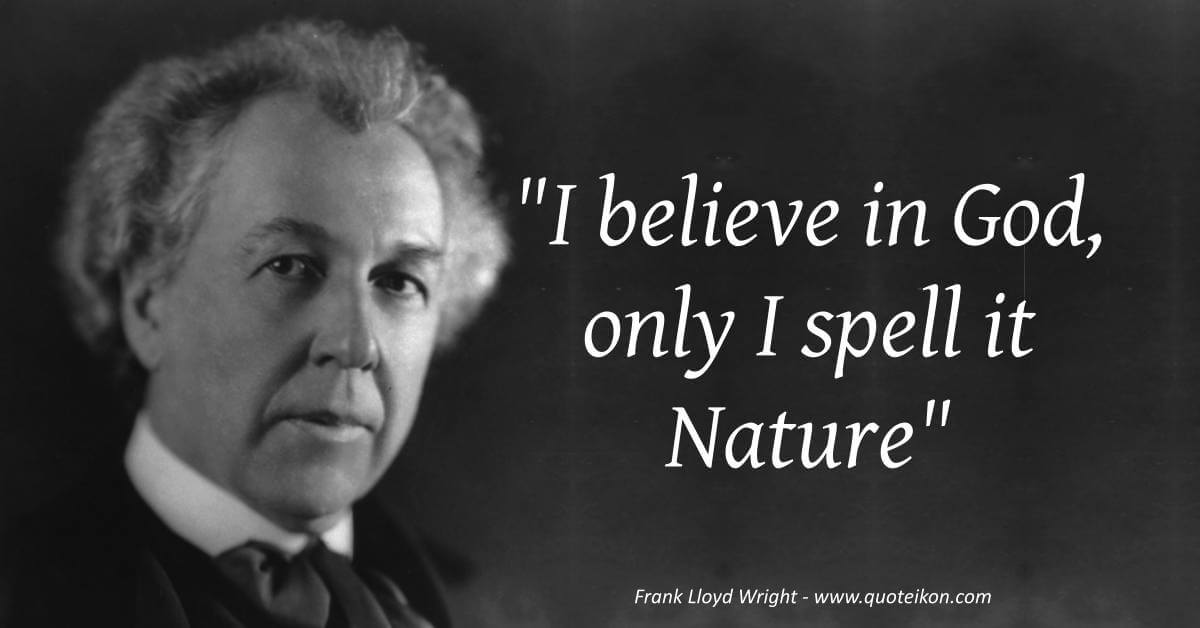