Indeed Puskas is the all time 2nd highest goal scorer in 20th century professional football with 681 goals spanning a 23 year career, he was second only to Pele who scored 758 goals. He started his career at Kispest AC who in 1949 were renamed Budapest Honved and became the national army team where Puskas rose to the rank of major which earned him the moniker of the galloping major.

In 1953 Hungary stunned the football world with a display that humiliated the mighty England 6-3 at Wembley stadium and to cap it all Puskas scored a goal of breathtaking quality to announce himself firmly on the world stage of international football.

During the Hungarian revolution in 1956 Puskas went into exile and subsequently received a football ban of 18 months. After the ban was over Real Madrid signed him and he went on to break records, win trophies and score goals galore.

He was the top scorer in Spain in 4 seasons 1959–60, 1960–61, 1962–63, 1963–64 and this was the player most top teams daren't risk to sign after his football exile due to being over weight and over 30, thankfully the Real Madrid president Santiago Bernabeu had the vision and Puskas had the talent and the script to write his own history.

On the international stage Puskas nearly averaged a goal a game as he scored 84 goals in 85 appearances for Hungary.

After he hung up his boots The Galloping Major was not finished with the beautiful game. Puskas went into management and guided Panathinaikos to the European cup final in 1971 although they lost 2-0 to Ajax, the final was played on the hallowed turf at Wembley Stadium.

One year after his passing, city officials renamed a street after Puskas in a fitting tribute to the sporting legend who grew up playing football on the streets of Budapest.

Fantastic talents tend to make great one liners so here is my list of 10 of the best Ferenc Puskás quotes.

His Real Madrid colleague and French footballer Raymond Kopa described him thus: "Puskás scared the hell out of goalkeepers from the 30-35 metre range. He did not just have a powerful shot, but precision as well. I thought he was a genius"

The Argentinian legend of the game Alfredo Di Stéfano recognised his brilliance: "The man was a super talent... He was one of the greatest players of all time"

The English wing wizard Sir Tom Finney placed him up there with the best: "He had a roly poly physique but a wonderful left foot and he was a brilliant finisher. I would put Puskas in any list of all time greats" 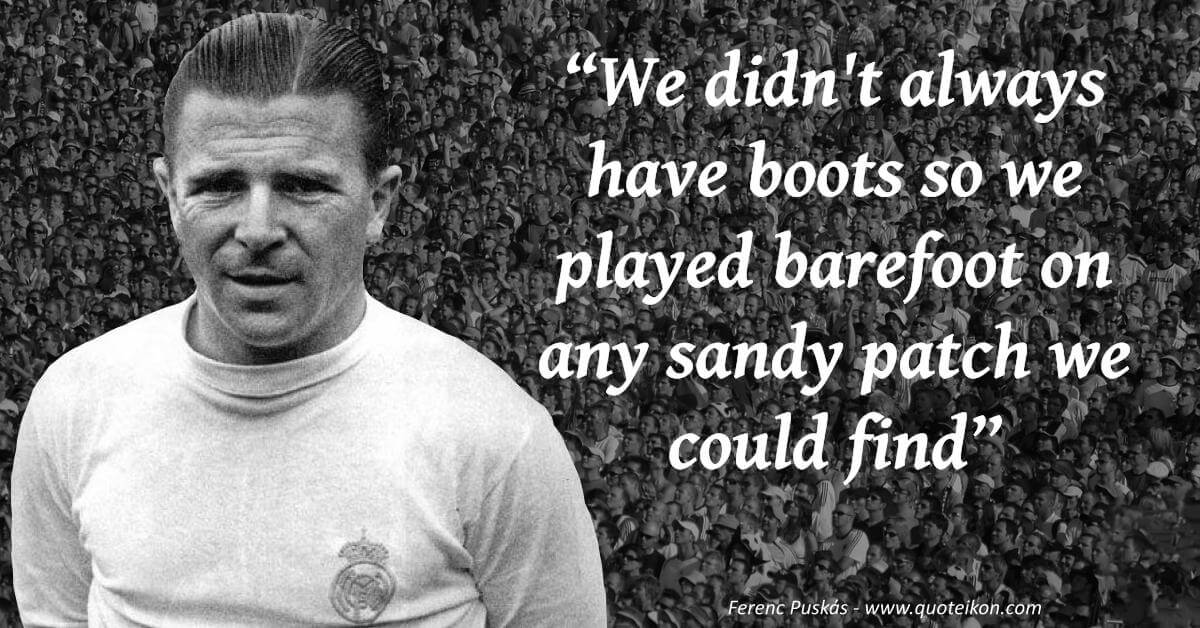