The story of Eva Perón is a rags to riches tale that ended too soon, but her legacy cut much deeper than a few successful years in politics. It was a story that has become part of the fabric of the Argentinian nation. After suffering a poverty stricken upbringing she was determined to rise up from her lowly upbringing and make a name for herself.

At 15 Eva followed the lure of the bright lights to Buenos Aires where she took up some theatre and modelling work. Slowly she moved up the thespian ladder until she landed a recurring role in a radio drama. From there her talent shone and she became the highest paid radio actress and eventually became a part owner in the radio station.

During a fund raiser for victims of an earthquake Eva met her future husband Juan Perón. They subsequently married and Eva then proved what a political asset she was by helping him become president. As first lady she worked non stop to help the poor and disadvantaged of Argentina, she set up a foundation in 1948 which helped thousands of poverty stricken Argentinians.

Eva Peron never forgot her roots, she did everything in her power to help the poorest of the nation and the public recognised this and rose to support her by the millions. She fought for womens suffrage and in 1947 it became law that women could both vote and run for office.

Unofficially Eva Peron was running the ministries of health and labour and her popularity with the people was at astronomical levels never seen before in Argentina when she was cut down in her prime by cancer.

It was 1951; she was the first Argentinian to undergo a hysterectomy in a bid to defeat cervical cancer, however she did not know she had cancer because the information was withheld from her. The U.S. surgeon, Dr. George T. Pack flew in to perform the operation and he was bound by doctor patient confidentiality not to speak about her illness. Eva was also the first person in Argentina to receive chemotherapy, again the exact nature of her illness was kept quiet from both the public and Eva herself.

Eva Peron went to her grave not knowing she died of cancer, before she passed away the Argentinian congress gave her the title of "spiritual leader of the nation".

Even in death she held great sway on the political fortunes of Argentina. A 1955 military coup d'état deposed her husband, Juan Perón, from power giving rise to the Peronist resistance movement. Eva Peron was the resistance's most powerful symbol; to safeguard her remains, they were covertly flown to Italy and buried under a false name in a Milan cemetery, where they remained until 1971. Graffiti adorned walls in Buenos Aires asked the question: "where is the body of Eva Peron?" as her status as a symbolic icon of the nation grew.

When the Peronist Party was legalised in 1971 plans were put into place to bring home the body of the nations favourite daughter and her remains were returned to Argentina in 1974; by 1976 Eva was finally at rest in the family tomb in Recoleta Cemetery, Buenos Aires.

The celebrated Argentine journalist Tomás Eloy Martínez was quoted as saying that Eva Perón was "the Cinderella of the tango and the Sleeping Beauty of Latin America". She did so much in such little time, one can only imagine what she could have achieved if fate had given her the opportunity.

To this day, Eva Perón is still revered as a national icon and will be forever held in the hearts of the people. When she spoke a nation listened and hung off every word she said as it was a gift of hope for the people she loved and cared so deeply for, it was a feeling that was truly reciprocal. It was her words of wisdom that inspired to create this compilation of 15 of the best Eva Peron quotes.

The respected Argentine journalist Miguel Angel De Renzis shared how the public felt by saying: "This woman, who only lived until she was 33 but who won immortality"

The Latin American historian Hubert Herring put her on a pedestal by saying: "Perhaps the shrewdest woman yet to appear in public life in Latin America" 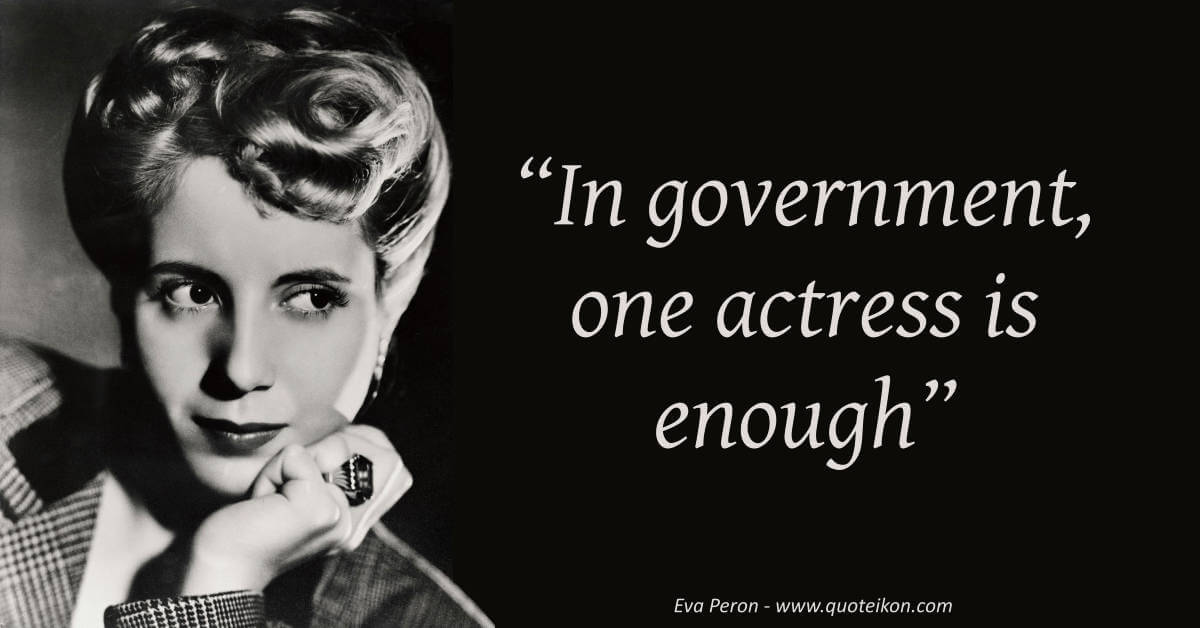