Brendan Behan lived his life loud and proud, he came from a staunch republican family living in the suburbs of Dublin and from an early age he showed his talent for writing as his poems and stories were published in the IRA's magazine Fianna: The Voice Of Young Ireland and the Irish Press where in 1931 at the age of 8 he became their youngest contributor.

At the age of 16 he set off to Liverpool in an attempt to blow up the docks but was arrested with explosives in his possession before he was able to carry out his unauthorised plot. He was sentenced to 3 years in Borstal and this confinement at her majesty's pleasure was his main influence in his first autobiography Borstal Boy. In a later incident he was sentenced to 14 years in prison for the attempted murder of two police officers but was released early in a general amnesty for political prisoners only to land back in jail again for plotting to break a fellow IRA member out of Wakefield prison in Yorkshire, oh the irony.

His prison time gave him the opportunity to concentrate on his creative writing and he penned his first play in Mountjoy prison in Dublin. The prison break was to be his last active form of reactive resistance for the IRA leading him into the 1950's which was the decade he started to come to literary prominence. Behan became a staple contributor The Irish Times and a literary magazine called Envoy that helped him pay the bills while writing his next play The Quare Fellow.

The Quare Fellow opened in Dublin in 1954 and was to bring him international fame as it progressed to the West End of London and Broadway in New York. His first autobiography was published in the form of a novel called Borstal Boy and was released in 1958 to critical acclaim. In his short life he underwent two transitions; The first was understanding the futility of political violence, and the second transformation was to go from a drinker who talked about being a writer to a writer with an ever increasing fondness of alcohol.

His likeness for alcohol is legendary and he bathed in an alcohol fuelled existence that helped him cope with the pressures of fame. He had become a diabetic in the 1950's and by the turn of the next decade his health was fading leading to his death in 1964 after collapsing in a Dublin bar.

When he wasn't raising a glass he was raising the roof with laughter with his witty one liners and legendary quotes about the ironies of life, so here is my compilation of 18 of the best Brendan Behan quotes.

The literary critic Kenneth Tynan shared this observation: "If the English hoard words like misers, the Irish spend them like sailors; and Brendan Behan … sends language out on a swaggering spree, ribald, flushed, and spoiling for a fight"

A quote from page 15 of the book 'The Brothers Behan': "Brendan described himself as a drinker with a writing problem, but what he really was a painter with a writing problem. No matter in what country of the globe he resided, or how many luminaries he met, the would always be a painter in his soul. If he had remained one for his livelihood, he could still be alive today"

A quote from page 23 of the book 'The Brothers Behan': "Brendan lit a bonfire under the arse of Irish literature. He took it by the scruff of the neck and dragged it kicking and screaming into the 20th century" 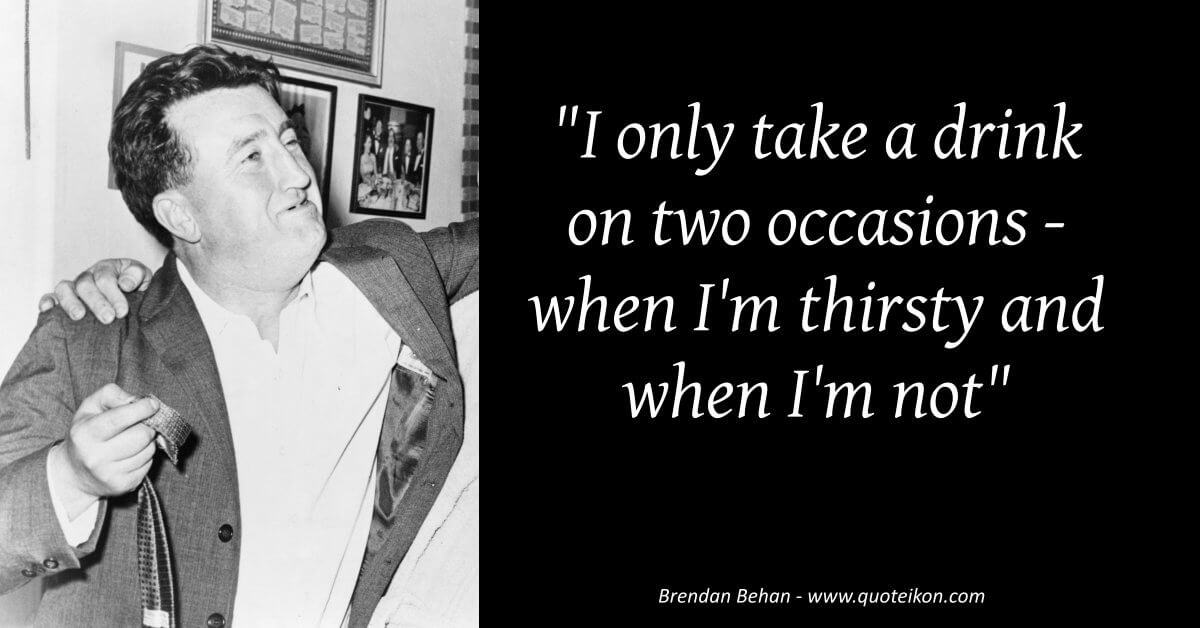