Yogi Berra spent a life time involved in baseball and won every honour the game has to offer including the distinction of leading both the Mets and the Yankees to the World Series.

Berra played in some great Yankee teams with all time greats Mickey Mantle and Joe Di Maggio and he was a world series winner on eight occasions that led him to be inducted into the Baseball hall of fame in 1972.

For all his success on the field it was his remarkable character that most people remember about him. Yogi had the ability to hold a captive audience on the edge of their seats because nobody could quite predict whatever he may say next.

Known for his insightfully funny witticisms he could have an entire press conference splitting their sides in incredulous laughter.

The changing room was never a dull place when Yogi was around and some of his advice to players has become legend, like advising Joe Garagiola "When you come to a fork in the road, take it" and the immortal line "It ain’t over till it’s over” when Berra prophetically predicted the possibility the Mets could claw back from sixth place to winning the National League’s Eastern Division title.

Indeed, he became more well known for his comments than for his sporting prowess, so here is my compilation of 20 of the best Yogi Berra quotes. Not bad for someone who had a cartoon bear named after him.

His baseball rival Dizzy Dean once said: "This leaves the Yankees with Berra, which ain't bad. He is the most dangerous hitter in the American League. A tough game is his particular kind of bear meat. He chews along easy-like, then hits any pitch in the book out of sight"

The Pittsburgh Pirates pitcher ElRoy Leon Face showed no fear when he stated in 1960: "Every time a man steps to the plate, I consider him to be potentially dangerous. But I'm convinced I'm going to get him out. As for the Yankees, they don't worry me at all—Mickey Mantle, Yogi Berra, or any of them—because I know they put their pants on one leg at a time, like the rest of us"

The right handed pitcher Bob Friend was impressed to say: "Yogi is the most relaxed hitter I ever saw or faced. What a guy! In spite of all the great things he's accomplished over the years he's lost none of his humility and none of his niceness. He's truly one of nature's noblemen"

The baseball catcher Joe Garagiola tried to make sense of his Yogism's: "He doesn't use the wrong words. He just puts words together in ways nobody else would ever do"

The pitcher Early Wynn made this comparison: "People think Mickey Mantle is the toughest hitter in the league, but I can usually get him out if I don't make a mistake. The real toughest clutch hitter is Berra. As you change speeds and move around, Berra moves right with you"

The left hander Rocky Nelson seemed pleased when he said: "Yogi said I robbed him of a double" 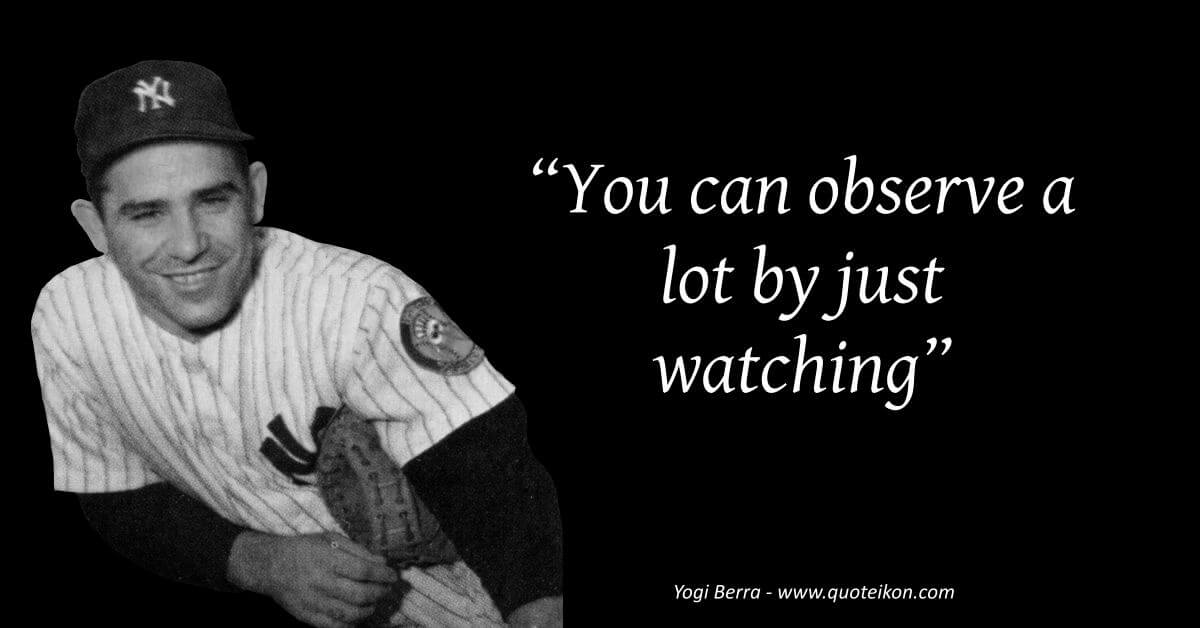