Yasser Arafat was the Cairo born leader who put Palestine back onto the map and dominated their politics for five decades. Love him or hate him he was certainly durable surviving plots, assassination attempts and three Israeli forces raids on his compound and still emerged to remain the face of the Palestinian independence cause.

One mans terrorist is another mans freedom fighter and while the people of Palestine idolised him for his David role against the Goliaths of Israel and the Americans (oh the irony) the West viewed him for many years as an irritation that should be squashed.

But still Arafat refused to stand down, he was steadfast and as the guerilla raids raised the collateral body count on both sides he eventually got the world recognition he craved for Palestine and a seat at the negotiating table so the voice of Palestine could finally be heard.

When organisations like the PLO have to commit atrocities to get noticed it makes you think about all the other marginalised peoples of the world who become refugees and have to settle wherever they are accepted and never again to know their homelands as they remember them.

Arafat could never have survived so long without some compromise and it was this compromise that led to the 1994 Nobel Peace Prize shared with the Israeli leaders. But mistrust dug into both sides and when the Israeli leader Yitzhak Rabin was assassinated a hardliner (Shimon Peres) took over and the peace deal was over.

Arafat spent the last 2 years of his life under an Israeli siege of his compound and he was finally allowed to leave to seek medical attention in France 2004, he never returned.

You have to be quick witted to stay in middle eastern politics for as long as he did and with that shrewdness sometimes comes some epic one liners so here is my compilation of 15 of the best Yasser Arafat quotes.

Nelson Mandela recognised his sacrifice: "Yasser Arafat was one of the outstanding freedom fighters of this generation, one who gave his entire life to the cause of the Palestinian people"

The UN Secretary General Kofi Annan summed up his career thus: "For nearly four decades, he expressed and symbolised in his person the national aspirations of the Palestinian people"

The Israeli peace activist and politician Uri Avnery was praiseful: "I respected him as a Palestinian patriot, I admired him for his courage, I understood the constraints he was working under, I saw in him the partner for building a new future for our two peoples. I was his friend"

The Cuban leader Fidel Castro was impressed to say: "Eternal honor and glory to the unforgettable and heroic combatant Yasser Arafat. Nothing can erase your name from the history of those great fighters who have struggled for the freedom of the peoples"

The Libyan leader Muammar Gaddafi was not so impressed: "I do not support peace in the Middle East. And I do not support Arafat. He is a stupid, incompetent fool!... The stupid fool is a zealot, a warrior, and a clever one. But he doesn't accomplish anything" 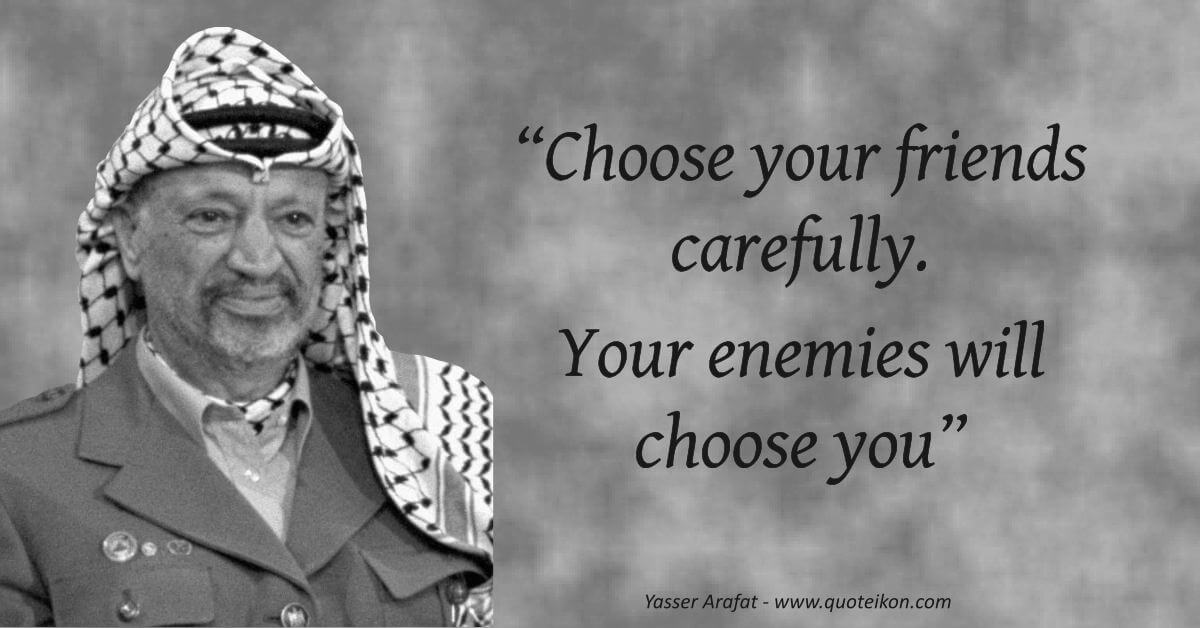