Thomas Gainsborough and His Brush Of Genius

The brush of genius was held in the hand of Thomas Gainsborough whose self-styled conception of the arts broke down the barriers of conventional artistic wisdom that taught the stages of painting in polar opposite to his natural eye for canvas creation.

Being inspired by the Dutch masters did not translate to his canvas via imitation. His was a skill of turning incisive observation into portraits with an uncanny likeness to the sitter that carried an expressive depth of mysterious beauty. His art was instinctive. He conveyed a subtle sense of a character captured in a moment so perceptively it drew gasps of appreciation from his patrons.

To paint the King and Queen of England was the highest honour of artistic achievement in eighteenth century Great Britain that was only bestowed to the greatest of portrait painters.

Yet, portrait painting was an nettlesome necessity to Thomas Gainsborough. Although he loved painting, it was portraits that paid the bills despite his personal dislike of the snobbery of many of his clientele.

The real artistic passion of Gainsborough was in his landscapes. His rustic pallette of colours blended the season's with soft Autumnal tones of brown or green emerging buds of life marking the Springtime season of growth. Alas, back in the day, there was little demand for landscapes which was much to the frustration of an exceptional artist tethered financially to his patrons vanity for portrait paintings.

He did introduce an innovative style of portrait sittings that would include landscape scenery as a backdrop to the subject. Gainsborough had a knack of using the seasonal landscape to accentuate the essence of feeling the portraiture conveyed whether it be jocularity or amiability or melancholic sobriety.

His style carried an ambiguity of perceived originality mixed with audacity bathed in the intuitive character of the perception of the artist. The deft touch of this son of Sudbury is realised in his soft tonal strokes using light to perfect the natural world he sensed in his minds eye.

Thomas Gainsborough was a naturally artist gifted with the brush of genius that never fully explored his true potential for landscape painting due to the time spent maintaining his existence by garnering Farthings, Shillings and Guineas from the world of portraiture.

Art historian Hugh Belsey shared this observation: "Gainsborough had a great deal of interest in musicians and likened a picture to a piece of music, once writing: ‘One part of a Picture ought to be like the first part of a Tune; that you can guess what follows, and that makes the second part of the Tune, and so I’ve done.’"

The art critic Jonathan Jones was inspired to describe the portrait of Mrs. Mary Robinson ('Perdita') thus: "Thomas Gainsborough, the artist who loved women, was the man to paint Perdita. Uninhibited about the eroticism of his culture, and at the same time someone with a heart, he was her perfect myth-maker"

Jonathan Jones then went further with this comparison: "There are only a handful of British artists you can put in the pantheon of geniuses, in the same category as Rembrandt, Titian, Goya, Picasso. Turner and Constable have a safe claim; Hogarth is there, too. But I believe the most brilliant British painter to be Thomas Gainsborough"

An eminent researcher, Andrew Baker, shared this assessment of Gainsborough portrait of the Czech musician Antonín Kammel: "The important feature of the portrait is that it shows Kammel as a composer, holding music rather than his violin. This is the composer as he wants us to see him. It’s a romantic image"

A British arts minister, Helen Whately, described him thus: "Gainsborough is one of the greatest British landscape artists and his work still wows audiences more than 250 years later"

The art critic, Martin Gayford, spoke of his expeditious artistic style: "The flickering rapid brush stokes were Gainsborough’s natural artistic handwriting. Like Van Gogh, he was pre-eminently a fast painter. One of his portraits of Gainsborough Dupont - the finest of all his works, in the opinion of his friend Philip Thicknesse - was done in an hour"

The artist Christopher Baker was impressed to say: "Thomas Gainsborough is chiefly known as a refined portrait painter. However, he also composed idyllic, rural scenes and Going to Market, Early Morning is one of his greatest achievements in this genre"

A director of the National Gallery, Gabriele Finaldi, described a Gainsborough as a masterpiece: "Rich in historical resonances, a painting of supreme poise and elegance, The Blue Boy is without doubt a masterpiece of British art"

The playwright Sir Henry Bate Dudley shared this critique about the painting Cottage Children in November 1787: "A landscape of uncommon merit has been painted lately by Mr. Gainsborough. It is a picturesque scene, and although limited in extent of country is beautifully romantic. It contains a rustic history that cannot fail to impart delight to every beholder"

The art critic David Pagel summed him up thus: "Gainsborough’s drawings and prints offer ample evidence of his fascination with instability and tempestuousness, grounding his paintings in an essentially Romantic, nearly modern vision of a world held in tension by contrary forces beyond our control"

The painter John Constable opined this opinion: "The solitary shepherd with his flock, the peasant returning from the wood with his bundle of faggots, the dark-some lane or dell, the sweet little cottage-girl at the spring with her pitcher, were the things which he delighted to paint, and which he painted with exquisite refinement, yet not refinement beyond nature"

The writer Ronald Blythe posed this interesting question: "Would there have been a John Constable, landscapist, had there not been a god called Gainsborough only a walking distance upstream?"

The English artist Ozias Humphry talked of precision painting: "Exact resemblance in his portraits.. ..was Mr. Gainsborough's constant aim, to which he invariably adhered. These pictures, as well as his landscapes [around Bath], were frequently wrought by candlelight, and generally with great force and likeness"

A sculptor, Lord Ronald Charles Sutherland-Leveson-Gower, appeared sympathetic with his description of the artists ambitions: "It is to Gainsborough's credit that he never attempted the so-called 'grand style' in painting as did Romney with such doubtful success; in that province Reynolds holds the highest rank of the artists of his day. Gainsborough in some respects was like a child; and this gives his character a certain attraction"

William Jackson, a musician and his friend, spoke highly of his moral and ethical status: "To his intimate friends he was sincere and honest and that his heart was always alive to every feeling of honour and generosity"

The poet Paul Whitehead, took note of his talent: "We have a painter here who takes the most exact likenesses I ever saw; his painting is coarse and slight, but has ease and spirit. Lord Villiers sat to him before he left Bath, and, I hope, we shall be able to bring his picture to town with us, as it is he himself, and is preferable, in my opinion, to the finest unlike picture in the universe, though it might serve for a sign. He sat only twice. The painter's name is Gainsborough"

An acclaimed art historian, Michael Rosenthal, was full of praise with this description of Gainsborough: "one of the most technically proficient and, at the same time, most experimental artists of his time"

Rev. Henry Scott Trimmer shared this insight: "With Gainsborough's masterly execution, the thinness and docility of his vehicle is no small part of its merit. Had he painted in a fat unyielding material, the delicacy and playfulness of his pencil would have been lost, though it must be owned that unsuccessful attempts to obtain a good vehicle mark his period" 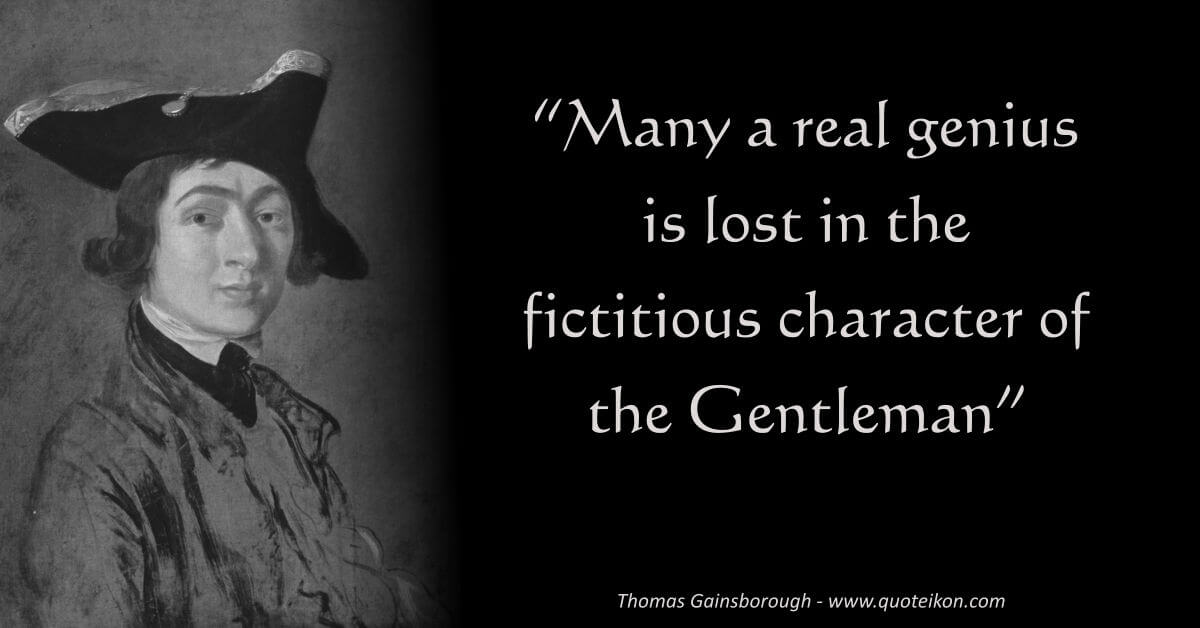