Eureka! Cried the artificer. From Newton's apple to Mendeleev's dream, they all raised their brows in vocal unison during that moment of inspirational discovery. But who was the greatest inventor of all? Many say that honour lays firmly with an American named Thomas Edison. But is this populist opinion based on invention or innovation?

Edison was a pioneer in research and development. His contribution to successfully bring innovations to the market is beyond question. He didn't invent the lightbulb, but he did create a marketable lightbulb that was inexpensive and reasonably long lasting, meaning it was easibly saleable to the public.

The big question remains: Was he an inventor or innovator?

He cut his creative teeth on the phonograph which recorded the immortal first five words of the nursery rhyme "Mary had a little lamb". He played it back to an astounded world and an inventive legend was born. This was the springboard for Edison to go from a madcap theorist to a guy to be taken seriously. The MSM took note and the lot of Edison went from, an annoying opportunist to a sage to be reckoned with.

Edison still had his detractors. A NYT writer was most displeased with the invention of the phonograph and remarked: "Something ought to be done to Mr. Edison, and there is a growing conviction that it had better be done with a hemp rope". Journalistic sensationalism aside, Edison's contribution to the modern world cannot be denied.

His blue sky thinking saw many products come to the market. He had an uncanny knack of turning the the art of invention into a profitable enterprise, and, the banks were only too happy to comply, or, should it be said take a back seat advantage with usury privilege.

Necessity, so we are taught, is the mother of invention. This is where Thomas Edison excelled. He had the pioneering spirit to take risks to achieve his goals. But, whereas Nikola Tesla would cultivate the mathematical probability of a particular sum, Edison would do the time consuming heavy work by physically testing every single mathematical possibility of every theory he was working on.

The mantra of Edison was to replicate every possible scenario in testing to prove beyond reasonable doubt that the theory or specific demonstration he was testing was successful. To call him a fanatical experimenter would be an understatement. Edison virtually wrote the book for testing new products.

Edison was also a pragmatist. He knew any invention had to not only be practical and achievable, but it had to solve a real-world problem. An invention cannot just look good on paper, it had to be marketable. Edison also had the tenacity to drive an invention from the drawing board to the production line and on into the market.

That journey from the drawing board to the market is in itself not sufficient to make a new product successful. The finished product needs publicity. PR is another field where Edison excelled. He worked just as hard on his public image as he did in his Menlo Park workshop. He carefully crafted his persona in the press and even the highly critical NYT eventually turned from sceptic to convert.

Edison was a master of PR. In 1878 he subtlety planted a story in the New York Sun about his work on electric lighting. He made a bold prediction that the cost for electricity would be from 12 to 15 cents in comparison to the cost for the same amount of light powered by gas which was nearly $3. The effect was instantaneous; gas lighting stocks went down and interest in investing in Edison's electric lighting system grew.

Many of Edison's inventions were actually innovations that improved existing theories. Edison invented many improvements to telegraphy, most notably for his sponsor Western Union. His 1891 invention of the Kinetograph Camera was based on the ideas of industry pioneers such as Wordsworth Donisthorpe, William Friese-Greene and Alexander Parkes. There were many contributors towards the invention of the electric light bulb and without doubt the work of Alessandro Volta, Humphrey Davy and Joseph Swan lay the groundwork for Edison to create his invention that would light up the world.

Indeed, Edison was a great man whose contribution to society is immense. The legacy of Thomas Edison tends towards a brilliant inventor, however, his greatest works were mostly innovations rather than novel artefacts created and deserving of the cry Eureka.

Nikola Tesla recognised his work ethic but disagreed with his methods: "If Edison had a needle to find in a haystack, he would proceed at once with the diligence of the bee to examine straw after straw until he found the object of his search. … I was a sorry witness of such doings, knowing that a little theory and calculation would have saved him ninety percent of his labor"

Henry Ford shared this assessment: "He felt there was a central processing core of life that went on and on. That was his conclusion. We talked of it many times together . . . Call it religion or what you like, Mr. Edison believed that the universe was alive and that it was responsive to man's deep necessity. It was an intelligent and hopeful religion if there ever was one. Mr. Edison went away expecting light, not darkness"

An eminent scientist, Joseph Henry, described him thus: "the most ingenious inventor in this country... or in any other"

He had his fair share of critics also, a New York Times writer was scathing in the 25th March 1878 edition of the paper: "This machine will eventually destroy all confidence between man and man, and render more dangerous than ever woman's want of confidence in woman. No man can feel sure that wherever he may be there is not a concealed phonograph remorseless gathering up his remarks and ready to reproduce them at some future date. Who will be willing, even in the bosom of his family, to express any but the most innocuous and colorless views?"

It took some time, but the NYT went from sceptic to convert and upon Edison's 1931 demise they wrote in his obituary: "He did more than any one man to put luxury into the lives of the masses"

The philosopher G. K. Chesterton viewed Edison's world view as a round peg matched to a square hole: "To my simple mind it is not obvious that a successful electrician is an authority on the immortal soul, any more than that a successful military strategist has an ear for music, or an admirable French cook a grasp of the higher mathematics"

The inventor Francis Jehl recognised that Edison: "knew then the modern principles of magnetism, long before they were formulated into the rules we use today"

The vice president of Thomas A. Edison Industries, Inc, Arthur L. Walsh, shared this statement upon his demise: "He never was an Atheist. Though he subscribed to no orthodox creed, no one who knew him could have doubted his belief in a reverence for a supreme intelligence, and his whole life, in which the ideal of honest loving service to his follow man was predominant, indicated how faithfully he followed those two commandments wherein lie ‘all the law and the prophets'."

U.S. President, Herbert Hoover, said in tribute to his passing: "The grief of every American in the passing of one of the great benefactors of humanity has manifested itself in the suggestion from hundreds of citizens that the Nation should join in a solemn tribute to the memory of Thomas Alva Edison. In response to this universal desire to pay personal respect to Mr. Edison's memory, I suggest that all individuals should extinguish their lights for one minute on Wednesday evening, October 21, at 7 o'clock Pacific time."

Hoovers predecessor in the Whitehouse, President Calvin Coolidge, recognised his contribution in a 1928 speech: "Noble, kindly servant of the United States and benefactor of mankind, may you long be spared to continue your work and to inspire those who will carry forward your torch"

Dr Lewis Parry read the following poem (written by Alice Marston Seaman) at Edison's funeral service: "They do not die - those dauntless ones who go into the silence of that narrow room; great spirits are not conquered by the tomb. Ever, the onward march of man shall know their presence; nor shall torch of time consume their soul's achievement. They, who gave overflow of consecration, that the new truths might bloom on rugged heights, where we go faint and slow, they are immortal. So, has one passed today - from life's full years of service grand and high, out from the confines of his house of clay, one with the winds, the waves, the earth, the sky, one, in the work he loved to live always. He is not dead: Such men can never die"

The author, Randall Stross, made this interesting comparison: "Would the public’s relationship to Edison have been essentially the same without the phonograph and without movies? Or with Mr. Jobs, if Apple had remained just Apple Computer?"

Wikipedia co-founder of Jimmy Wales was impressed to say: "He was also able to captivate the public with his vision for the future. The electric light wasn't some curiosity for a museum, it was something that was going to transform life for everyone"

The historian Bernard Carlson described him thus: "Edison was the one guy who could basically invent a better bulb, and figure out how to develop the companies and the distribution system you would need to get that product out there and in everyday life" 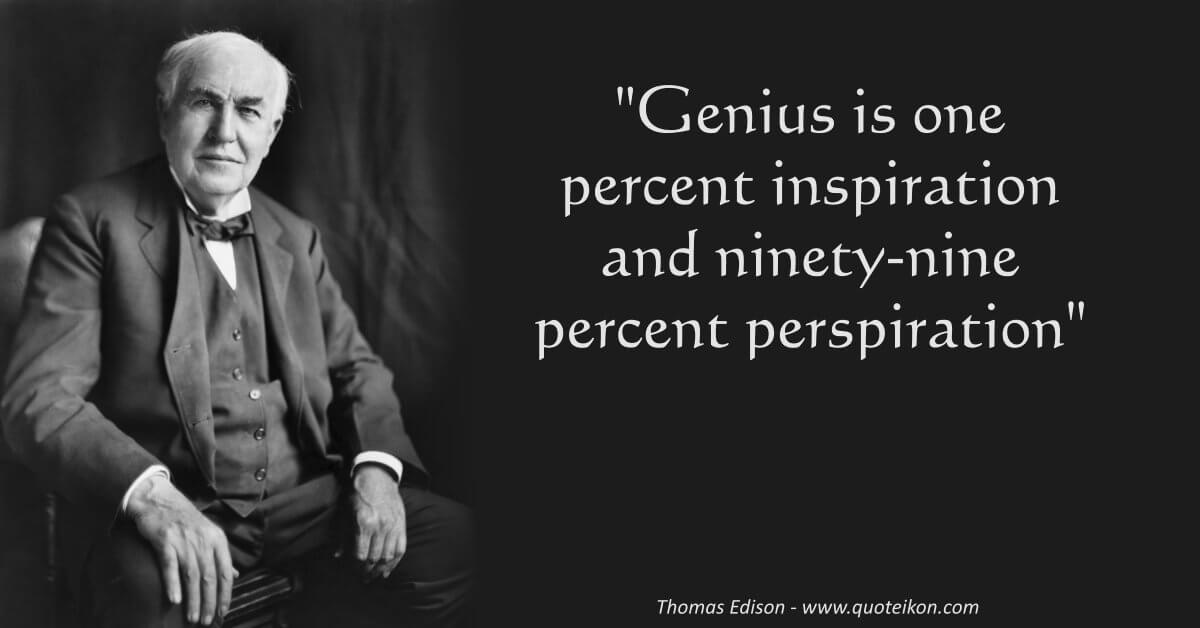