Raul Alfonsin was a successful and busy man long before he entered the political arena to ascend the ranks to attain the presidency. After elementary schooling he joined the Liceo Militar (military academy) General San Martin and after 5 years he graduated as a second lieutenant.

Alfonsin's career path took a turn at this stage as he went on to study law and obtain a degree for entry to the bar. In his hometown of Chascomús he founded the newspaper 'El Imparcial' and joined the political party UCR in 1946 and proceeded to become a city councillor in Chascomús.

Raul's political career really took off when he was elected to the National Congress in 1963. The following 2 decades saw power swinging from democracy to military rule culminating in the infamous "disappearances" of the late 1970's. The unpopular military then invaded the Falkland Islands in 1982 only to be swiftly defeated by the British and all their remaining credibility was completely gone.

After the military agreed to a free election Alfonsis led UCR to victory over the Peronist party and went straight to work in restoring democratic process to the state and a judiciary free from the interference of the government and military. He went further than many would believe by actively prosecuting military personnel responsible for the deaths of thousands during the "disappearance" years.

Despite Alfonsin's term as president being plagued by economic issues, one of his lasting legacies was bucking the South American trend for corruption as he set a good example of not using the state for personal gain until he stepped down from power just short of his full 6 year term.

Upon his death in 2009 he was awarded a full state funeral and the nation went into 3 days of mourning at his passing.

Great statesmen like Raul make riveting speeches with a depth of meaning to the people. He was also good for a one liner, so this is my compilation of 10 of the best Raul Alfonsin quotes

Former foreign minister Dante Caputo was quoted as saying of Alfonsin: "The fundamental accomplishment of Alfonsin has been to prove that we Argentines - not just the Government - were capable of breaking the vicious cycle and constructing a democratic country"

When President Cristina Fernández unveiled a bust of Alfonsín in October 2008 she was quoted as saying: "Whether you like it or not, you are a symbol of the return of democracy"

Leading UCR politician Gerardo Morales was moved to say this after his death: "When we were young in 1983 and sang 'we are life, we are peace', it was more than a slogan, it was a synthesis of our hopes: do not suffer more persecutions, live in democracy, in freedom and peace. We were part of the collective project led by Alfonsín" 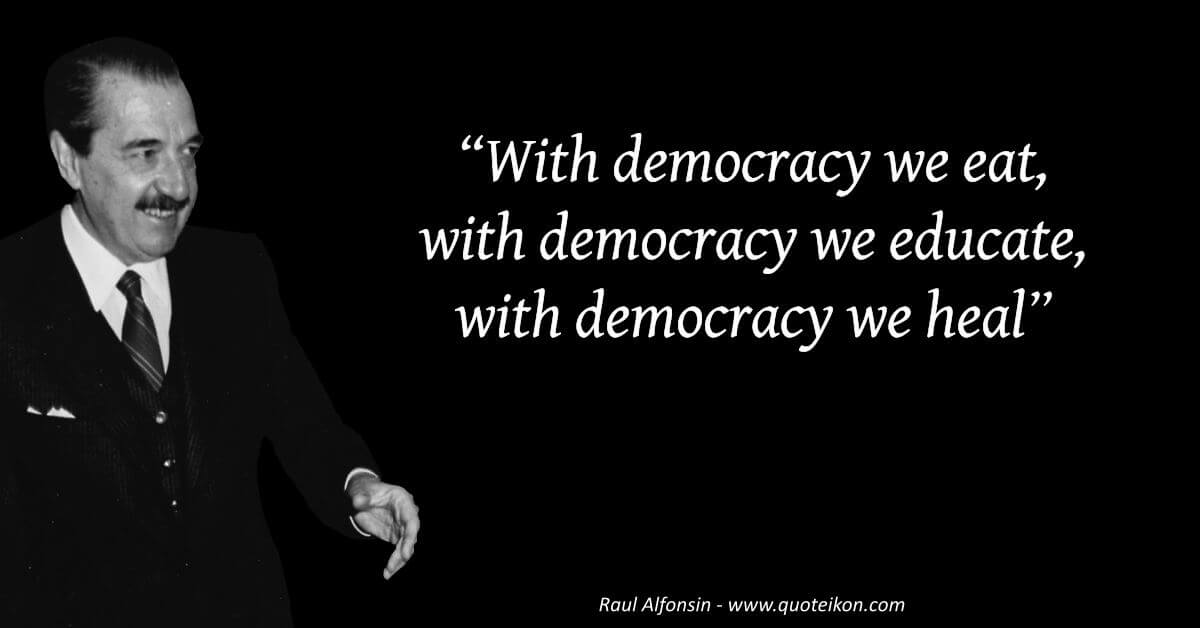