He is often described as the eternal rebel. The British Raj seemed to agree as they imprisoned him on numerous occasions. He was more than just a rebel, he was a man with a vision of a world without distinction, he became a symbol of truth and equality. His name is Kazi Nazrul Islam a poet of parity, equality and egalitarianism.

Revered in the sub-continent, adored by the people of Bengal, Kazi Nazrul Islam has taken his place as the national poet of Bangladesh. His was the voice of the oppressed and he never backed down from expressing his thoughts on social equality. Literature was his tool of choice for delivering his postulation of parity and poetry was his sharpened blade that pierced the minds of established men and inspired the people to revolt.

Nazrul rose from humble beginnings and struggled to get an education worthy of his curious mind. At the age of 10 his father died and Nazrul had to find work to help support the family. His uncle Karim helped keep the young boy focused on education by teaching him Arabic, Persian and Urdu. It was a difficult period of his life but, despite the hardships, he still found time to study Bengali, Hindu scriptures and Sanskrit literature.

Although a Muslim by birth, Nazrul chose to study both Islam & Hinduism in great detail. The path he followed saw him rise above religious fanaticism, he saw through it for what it was as he deemed it a barrier to harmony.

Kazi was at pains to point out how the British encouraged each religion's fanaticism. The British were masters at divide and rule. It was always at the expense of a harmonious brotherhood forming a united front that would be powerful enough to usurp the colonialists.

His steadfast belief in equality was not just focused on the teachings of the Bible, the Koran or the Vedas as he despised any form of intolerance whether it be caste, creed, racial or gender. Nazrul spoke highly of women as can be seen in his powerful poem "Woman".

Kazi Nazrul Islam drew inspiration from many sources including the silky verse of his fellow Bengali poet Rabindranath Tagore and the Russian revolutionary Vladimir Lenin. He also greatly admired Mustafa Kemal Ataturk who had successfully replaced the Ottoman Sultanate with a secular republic free of fundamentalism with no compulsion for women to wear veils.

His thinking explored the possibilities of emulating the Turkish reformation in India and Bengal. He even wrote a poem in 1921 entitled "Kamal Pasha" as a tribute to Ataturk's monumental achievemnts.

1921 would prove to be a watershed year for Kazi Nazrul Islam as he launched his journalistic career, composed some epic poetry and made it into the 'person's of interest' list of the British authorities who would eventually jail him for sedition.

In 1922 the sharpened pen of Kazi Nazrul Islam wrote his most famous poem with "Bidrohi" (The Rebel). Its publication ran concurrent with Mahatma Gandhi's Non-Cooperation Movement much to the ire of the British authorities.

Nazrul was never convinced by Gandhi's non-cooperation movement but he did join it out of solidarity to overthrow the colonialists. He agreed in principle to Gandhi's vision of a united India where Hindus and Muslims co-existed in harmony, he just did not agree on the method to achieve this goal.

His magazine Dhumketu (Comet) was critical of the authorities which led to its offices being raided in late 1922. Nazrul was highly critical of the British Raj so his arrest was inevitible. On 22nd January 1923 the police arrested the rebel poet and charged him with sedition.

During his incarceration, Nazrul was mistreated and began a 40 day hunger strike in protest. He was eventually released in December 1923. His stay behind bars was inconvenient but productive as he penned a number of poems and songs.

Upon his release he found the British had placed much of his body of works on a banned publication list which drove distribution underground and gave him a boost in demand.

Nazrul faced threats and intimidation from the authorities throughout the 1920's. In 1930 he had another book banned and the publication of "Pralayshikhm" would see the rebel poet spend another year in a colonial jail for sedition.

His journalistic contribution saw him write many editorials promoting the idea of creating a new society that replaced inequity and injustice with impartial justice coveting the dignity of the individual regardless of cultural, caste or religious circumstances.

Kazi Nazrul Islam was also a composurer of fine stature with a musical body of works amounting to nearly 4,000 songs. His poetic output of silken verse poured powerful punches into his compositions which covered topics as diverse as philosophy, spirituality, culture, rebellion, reform and romance. To this day, his music is still revered in both Bangladesh and India.

His creative spark shone brightly for 22 years from 1920 until 1942 when he was cut down by a mental paralysis that silenced the vibrant free spirited mind of the rebel poet. The early diagnosis was uncertain and years went by until a Viennese physician diagnosed Picks disease, but by then the damage had become irreparable.

Gone but never forgotten. His influence lives on as the national poet and cultural icon of Bangladesh. Kazi Nazrul Islam brought meaning to a people through his universal and societal insights. His was a voice of the people for the people without any expectation of grace or favour.

The people listened, they understood and they used his songs and poetry as inspiration in their fight for an independent India and years later an independent Bangladesh. He was a rebel with a just cause who created some fantastic one liners and inspired me to compile this list of 30 of the best Kazi Nazrul Islam quotes.

Rabindranath Tagore recognised the importance of Nazrul and sent him a telegram stating: "Give up hunger-strike, our literature claims you"

Professor Harjinder Singh shared this anecdote on one of his poems: "Bidrohi was syncretism at its best. It voiced the anti-colonial spirit of the times when militancy was around. Yet, the poem is highly anti-militarist as well. It says ‘I will rid the military from the entire world’ that he will remove kshatriyas from this world"

The researcher Saswata Ghosh shared this observation: "Much less did I know then how big a controversy [one] particular usage [had caused] that asserted the Bidrohi spirit aspired to break through the seat of Allah. In the same breath, he unapologetically invoked the audacious rebel view of the Hindu hero who dares to mark his footsteps on bhagwan"

Saswata Ghosh went on to say: "Kazi Nazrul said that he will come back [be reborn] as a servant of the one and only indivisible God that is above Hindus, Muslims, nations and creeds. That can be taken as his final testament on what can be called his syncretic secularism"

Dr. Purakayastha was impressed to say: "Nazrul is not the only answer, but he provides a big answer"

Serajul Islam Choudhury the Bengali literary critic and professor emeritus spoke of his inspration: “There are many ups and downs in exiled life. Nazrul’s own life and writing act as an inspiration and strength.”

The author Liesl Schwabe touched on his cultural and revolutionary importance: "Nazrul’s significance extends far beyond the academic sphere"

Liesl Schwabe went on to add: "He would prove himself revolutionary, igniting both Bengali literature and its politics"

The writer Sarita Biswas shared this description: "Kazi Nazrul Islam is a rebellious poet who symbolizes truth and equality"

An archived file from the British Government commented on his magazine: "The Dhumketu was started in August, 1922 under the editorship of Kazi Nazrul Islam, an ex Havildar of the Bengali Regiment and a poet of considerable ability… we do not understand swaraj or the like; for different men interpret that differently" 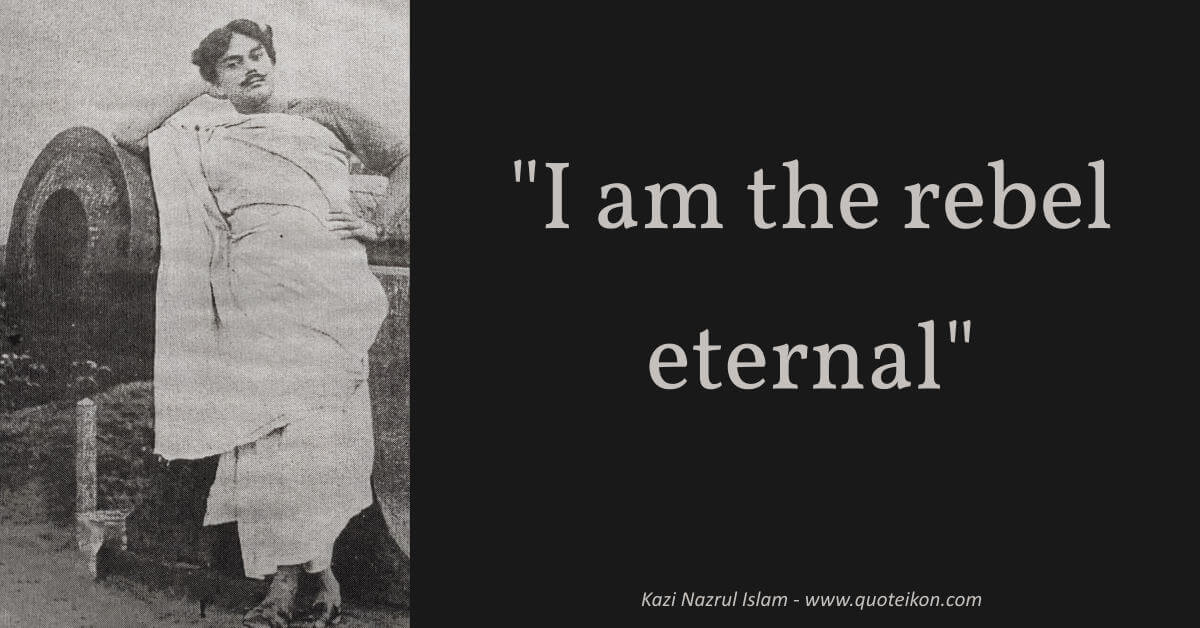